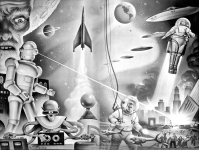 The George Abercrombie Fox series of historical naval fiction novels by Kenneth Bulmer (writing as Adam Hardy).  George Abercrombie Fox is an officer in the Royal Navy during the Napoleonic Wars at the end of the 18th century. He fought his way up from the ranks, a nearly impossible feat in that period, and has the attitude to match. The tag line for the series is "the toughest bastard on the high seas."

A gripping series of novels about the U-boat war waged with grim ferocity in the bitter depths of the world’s oceans.

Intense submarine action from the early days of World War II through to the Cold War, by veteran submariner Harry Homewood.

The Naval Service of the Honorable East India Company, popularly known as the Bombay Marine, operated in romantic areas in perilous times. From the Indian Ocean to the South China Sea, from Calcutta to Canton, the Company ships were famous for their speed and daring. The "Bombay Buccaneers" who sailed them were the stuff of legend.

Percival Merewether, promoted from First Lieutenant to become the junior Captain in the Company’s Service and given the command of his first ship - the Rapid, had quick wits and daring to match his ambition.